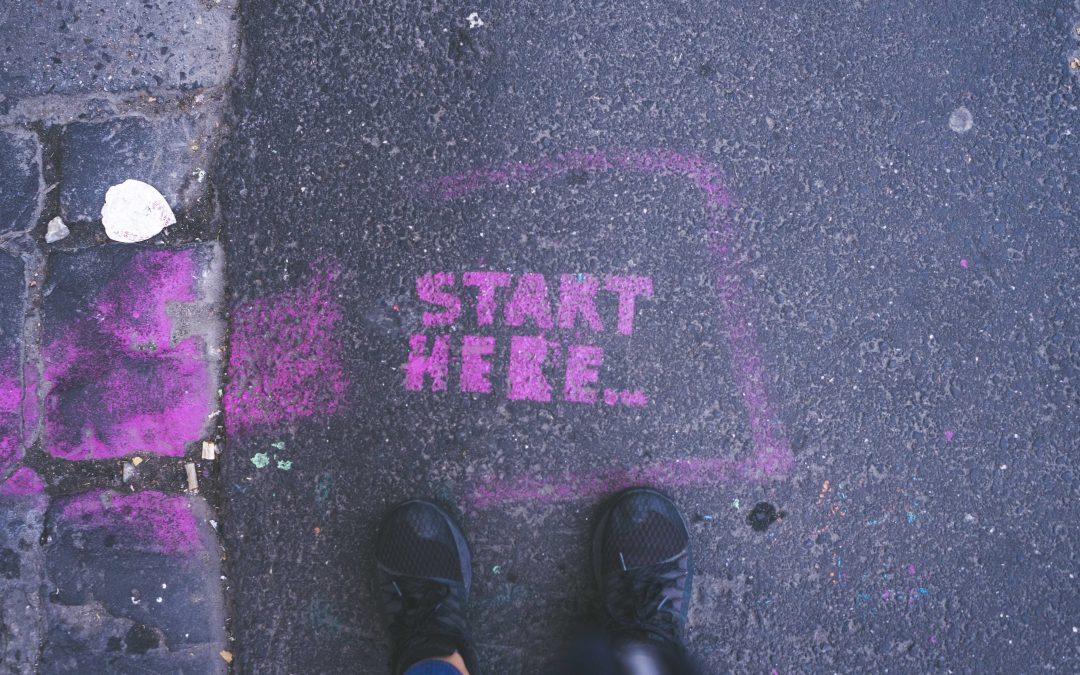 How To Get Started

There are a few things that people say to me when we start digging into their public speaking. I think of it as that thing you do when you feel like you are about to be stretched. You get a bit defensive.

In my case, when I am being stretched (or taking on feedback), I find myself saying things in a high voice like “I have got better at <insert criticised area>” or “You should have seen me 6 months ago…!” And the air is filled with my awkward laughter.

When I am the one getting people ready to improve their speaking skills, I hear this one a lot from my clients: “I am OK once I get started”… In fact, one of them openly admitted recently “I just find it so hard to start the damn thing”.

It’s like when you go to introduce yourself to someone, cold. It’s hard. It feels awkward. There is a bump in the road you have to get over, but it feels like a wall you’ll crash in to.

Same when starting a talk. So here are some of the tools I use with my clients to help them through that bit.

When I teach storytelling I get the class to start with the problem or the mistake that has happened – we often think this is the middle of the story. It’s not. It’s actually where the story begins.

The trick in all good talks is to start further in than you think. We worry too much about the setup and the context. For example:

“There’s a moment when you lose something, that your heart sinks, time stops and you think – nothing is going to be the same again”

Is a better start than “Yesterday I was the park, the birds were singing, and the sun was beaming down. I had this really great back-pack, that I bought the day before, and I thought that I had everything with me but I didn’t”

Dawdling in the detail lands you in the depths of dreary.

The same applies to when you are prepping. A client said to me recently that when they were writing they weren’t sure how to begin. Thinking we have to have a grand beginning can hold everything back. The trick is to just get going, the order can come later. As can the killer first line.

And more often than not once the story is written a great headline pings out at you.

The adage “Tell them what you are going to say, say it, then tell them what you have said” has been taken so literally that I keep coming across people starting their presentations with the line:  “I am here to talk to you about…”

The best first line I ever heard was:

“This talk will start when there is an earthquake” …

It was followed by a stretch of silence about 2 minutes long (which on stage is a lifetime). I was in.

The speaker, it turned out, is a dancer who had implants put in her feet to sense the seismic activity of the earth. There are earthquakes all the time as the earth moves beneath us, so when the plates move, her feet vibrate. She was fascinating and captivating.

It’s just not that interesting.

3. Cliches are cliches for a reason

The problem with trying to land a great first line is that you stray into sounding cliched. And in a bid to not sound cliched you then start avoiding the cliche. And then you just come back round to “Today I am here to talk to you about…” #yawn

Cliches are cliches because they work:

“The bottom line is…”

“Only time will tell…”

Some people feel that cliches mean that you sound like everyone else, and yes this can be true. But, I see cliches as a town you have to go through to get to the destination of “you”, and if you don’t go through it, you won’t find the right you.

So use cliches, because people will hear the familiarity in them, and then move through them to find your own way of saying it.

As an aside, beware: introducing yourself is underrated. While you don’t need to introduce yourself if you have been introduced, if you do – speak slowly and clearly.

Many people I work with rattle out their name and where they are from as quickly as possible because it’s boring or it feels weird.

Introducing yourself is a chance for people to tune into you – especially if you are speaking in a place where you’re the one with a strong accent. It also allows them to get to know you, and it indicates how important what you have to say is. Plus what’s the point of you standing there and saying something revolutionary, if the audience can’t attribute it to you because you said

Your opening line is the opportunity for your audience to go “OK I am going to invest into listening to this!”. Take the time to make it a good one.